A Nation of Cat Lovers

And so to day two of our adventure. We got up at goodness knows what hour in the morning, (5 o’clock), and got ourselves properly abluted and dressed to be ready and on parade at 06:15 hours in readiness for an 06:30 departure. We got downstairs to the lobby to find others already checking out. I heralded a ‘Good Morning’ but unfortunately it fell on deaf ears, (yes, dear reader, I fear the ear trumpet is nearing!), and proceeded to engage with a very polite and helpful young man on reception. I settled my account for our libations last evening and enquired, as agreed with others, on the logistical arrangements for taking the shuttle to the airport. I learned that this had a cost of 20 Qatari Rials per person. As others were also in the process of checking out, I decided to confirm that this was the arrangement we were happy with. I called over, but received no reply. The very helpful hotel staff also tried to attract attention but to no avail. Alas, I had to make the decision and pay over the funds. It subsequently transpired that others had decided that this was too expensive and had order a car to take us instead! I pointed out that I had been attempting to discuss this but to no avail. For ease, I asked the very helpful you gentleman to return my funds which he duly did. All was well.

We arrived at Qatar airport once more and proceeded to checkin. Others checked in on one desk and myself and Captain Clarke

Looking out to aircraft in Qatar

checked in on another. Once the process was completed others noted that we had yellow tags on our luggage and they had orange and asked the significance. The very nice checkin lady explained that our luggage was tagged with first class tags whilst others had business class tags. Whilst this was only due to the fact that she didn’t have any business class tags, it was sufficient to cause a look, (lemons … sucking)! We shall keep these tags for the remainder of our trip! We proceeded to the lounge in the new Qatar airport. Others decided, on balance, that they preferred the old airport. The new airport is quite impersonal and clinical but there were other reasons too. Although I had done my best on arrival, my advice that there was a restaurant at one end of the lounge or a coffee bar in the middle had fallen on deaf ears, (hmm), and, consequently we had used a small lounge where we had to serve ourselves. Whilst I am fully conversant with the dissatisfactory nature of this arrangement, I did feel that had others heard us we might not have fallen foul of this particular problem. 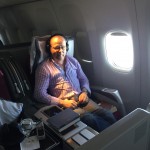 Watching ‘Chef’ on the way.

The flight down from Doha to Bangkok was really uneventful. A fantastic plane – Boeing 777. Although, in my opinion, this aircraft is superior to the Airbus A340 we flew to Doha on, one can’t complain about either. The pilot had clearly heard about his predecessor’s unfortunate inability to avoid light turbulence and did his utmost to clear us of it as soon as he could. Breakfast was the meal served on this flight. We didn’t really want breakfast immediately after take-off and, as a result, asked if we could take it a little later. A little later came quite quickly as clearly Captain Clarke couldn’t hold off for long once he smelled the food! The omelette was delicious and was accompanied by potato cake, (very good), a chicken kebab, (of Indian origin and excellent), salad, a corn cake and sausage. It was all very good and could have been preceded by some disgusting looking bird food, (I think they call it Granola or something), and followed by pastries and rolls, but I didn’t want to appear rude and one doesn’t like to indulge too much! Others had food. During the course of the flight I watched an excellent film called, ‘Chef’ about an American chef, (I realise this is an oxymoron, but stick with me!), who had his career ruined by a restaurant critic and an owner who refused to let him cook what he liked and how he rebuilt his life by beginning again with a catering van, (food truck, but this sticks in my throat). Along the way I picked up some excellent recipes for Cuban cuisine … something I struggled with even when in Cuba! 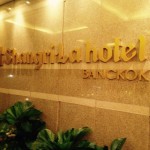 And so, finally, we arrived in Bangkok. The airport is about 45 minutes drive from city, but our carriage was waiting and all was well. We arrived at our hotel to be met with our ‘guide’ whilst in Bangkok. She spent her entire time with us trying to sell us her ‘special’ tailor’s services, extra trips etc., but we resisted all of her suggestions as she is obviously on the take! Others began to get quite angry with her, but I advised caution and we just listened to what she said and then ignored it! The hotel, however, is superb. 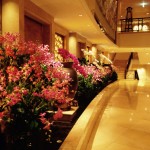 The reception area is just filled with orchids which are beautiful and, in some rare cases, aromatic. Once we had dispensed with the services of our rep, (who insisted she had arranged wonderful rooms with a riverside view, but these had actually been booked in advance by others!), we checked into our rooms and found them nothing but exceptional. The rooms are very well proportioned, have excellent facilities, (the WiFi is free and enables me to prepare this brief report), and there is a tempting array of fresh fruit to greet us. We used the facilities for a short ‘Facetime’ call to our friends back at home, just to let them know that we had arrived. It was, getting late, and we needed to find a suitable place to dine. We felt that, as the temperature and humidity remained particularly high, (around 92% humidity and 35 degrees celsius), that dressing for dinner would be inappropriate and, in fact, dressing down was a better option. (Fortunately, Captain Clarke didn’t take this too literally as arrest on our first night would have been regrettable!) 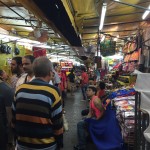 We took a short taxi ride to a night market called, Patpong. Very entertaining!! There were an uncountable number of market stalls selling everything from t-shirts, to belts, watches and even underpants, (I had come appropriately dressed and wasn’t in the need for further undergarments!), but what stood out most was this wonderful nation’s compassionate nature and demeanour towards animals, and cats in particular. Now, clearly, on the first night of our holiday in Bangkok there was no way that I could take up any of the offers that I received to adopt a cat, but the thought was definitely there. On every corner and almost next to every market stall was someone offering me a pussy for the night. Remarkable generosity! This wasn’t, however, the only thing I discovered. It is also a nation dedicated to, what I image must be, the national sport – table tennis. These same, such generous, people were constantly offering me pussy and telling me that they came with ping pong balls. Ah, what a delightful place! 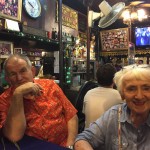 Having left the market, and feeling somewhat sorry for all those pussies that would be lonely tonight, we proceeded to seek somewhere to eat. There was some discussion of trying some street food but, ultimately, the decision was made to go to a restaurant instead. This was an interesting place on a bustling street somewhere in Bangkok. Captain Clarke ordered first and his arrived first. Others ordered second and theirs arrived second, I ordered third and mine arrived third and finally, others ordered fourth and theirs didn’t come until the staff were prompted that something was missing. I enjoyed a delicious plate of chicken in chilli, cashew and soy sauce with a little fried rice on the side and some Phad Thai noodles and washed this down with a glass or three of the local white vino collapso. Jolly good indeed! Others had food and some suggested it as very hot indeed! 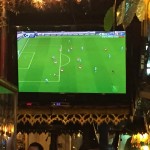 English football on the TV!

One thing that was slightly disappointing was the entertainment in the restaurant. One would have thought that with such a strong leaning towards the national sport of ping pong that the television that seems to be a feature of many Thai restaurants would be showing an enthralling game or two – maybe interspersed with some of those lovely pussies looking for some company – but no, not a bit of it! I had travelled 10,000km, taken two long flights and two days to get here and what did I see in my first ever restaurant in Bangkok? Manchester United versus Manchester City!!! (Manchester City won 1-0 should anyone care … which I most certainly do not!) Quite remarkable really. Apparently Manchester United are very popular here in Thailand and virtually everyone we met seemed very knowledgeable on the subject – certainly far more than me! 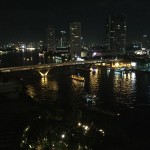 And so, finally, our first night in Bangkok drew to a close. We decided to return to our hotel and all it a night. We took a tuk-tuk back to the hotel – this turned out no so much to be eventful, but painful! In my chivalry to ensure that others were able to share the tuk-tuk, I perched rather precariously on the ‘side seat’ which was little more than the size of a postage stamp and very hard on the posterior! We lurched, sped, braked hard, and swerved, around various corners until finally reaching our hotel – by which time I honestly felt as if my arms would drop off from hanging on so much and felt that my rear might be bruised forever! We went back into the hotel and others retired. I advised Captain Clarke that after all that excitement I really needed a stiff one … he took the hint immediately and we popped into the bar for a quick tincture of the local brew. Interesting, but for an extra 10 baht, (about 19p), we could buy Famous Grouse, so for a second nightcap, we did! On returning to our room, we made another ‘Facetime’ call to our other friends and, following this, retired for the night.

So, what have we learned so far. This is a nation of cat loves with a passion for ping pong! It’s RudyMenTerry!

View the photo gallery for A Nation of Cat Lovers here