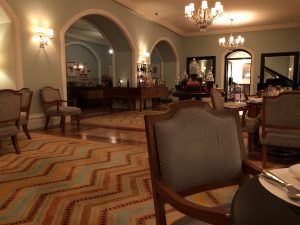 The Sea Lounge in the Taj

Those of you that read all the way to the end will be pleased to hear that, after yesterday’s tome, today will be somewhat shorter! Yesterday evening we popped down to the Sea Lounge (so called because it overlooks the harbour of Mumbai) in the Taj for a complimentary ‘Royal Signature’ – a scotch whisky that was allegedly drank by Royals who stayed at the Taj. To be honest, it wasn’t all that great and was a little bit ‘peaty’ to my taste. Whisky is very expensive in the Taj because they only serve premium imported brands which attract huge rates of tax. Captain Clarke turned to me and said, “I don’t know what you were on about suggesting to our friends that we were getting free drinks. When was the last time we had a free drink?”, I said, “The one you’re drinking now!”. “Oh yes, said he”, subject closed! 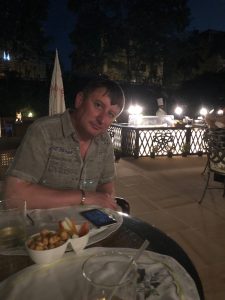 Having one last whisky by the pool at the Taj.

To be perfectly honest, I have always wanted to stay at the Taj – ever since I saw a documentary about it at home – but you do have to have a certain amount of money to really enjoy it, I feel. There were whole families who had booked a suite of rooms that I could never compete with, or young girls who obviously have very rich fathers who were just there having fun and drinking cocktails at £100 per glass! We enjoyed the Taj very much indeed, but it is one of the most expensive hotels we have ever been to! We had dinner in the Shamiana restaurant. It is a lesser expensive restaurant, but all things are relative! I enjoyed a lamb (goat) dhansak with buttered naan, kachumber and pickles, Captain Clarke had chicken and chips! Both meals were, of course, excellent and we washed them down with a relatively inexpensive bottle of Indian red. Indian wine is about a third of the price of imported wine anywhere that you buy it and we have found it to be very acceptable. The odd bottle can be a bit rough, but that can be said of any wine! Having enjoyed our meal we decided to push the boat out and have one last drink by the pool. This we did. The waiter that had served us when we first arrived and had dinner by the pool at the barbecue was on duty. Not only did he remember what we drink, but also our room number. Keep in mind they have 550 rooms at the Taj and a huge number of guests use that pool bar, I call that proper service! He earned a Taj sized tip!! 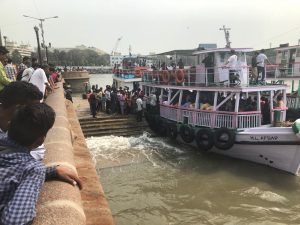 Boats are constantly loading to take people to Elephanta Island.

We rose this morning to a beautiful sunny morning in Mumbai. Having popped down to the Sea Lounge in the Taj for a spot of breakfast, we returned to our room to begin packing ready for our departure to Delhi. Having basically sorted ourselves out we decided on one last wander to the Gateway to India. It is amazing how popular this landmark is but it wasn’t too crowded this morning. We went down to the Gateway and spent about an hour just wandering around, taking in the views, the sights, the sounds of the environment. Watching the boats that are constantly lining up to take passengers to ‘Elephanta Island’ (no Seudo Nym that is not a typo!). The boats leave teaming with passengers all desperate to make their way to the island to see the cave temples and the Elephanta Caves that have been carved out of rock. The boats look precarious at best and apparently take about an hour to get there. I don’t think it would be for me – particularly after I saw the catering team (largely Chi, but food too) washing the serving trays out in the sea water!

Captain Clarke really hasn’t grasped the art of the selfie – he is holding a Nokia 115 that doesn’t have a camera!

Whilst at the Gateway to India we decided to have another go at the selfie thing that everyone else seems able to do. I have to be honest, we’re not that good at it. Either we get one of us in and not the other or cut half of the face off, or we manage to show ourselves with more chins than even we believe we have, or we are so far in the forefront that we block out whatever it is that is supposed to be behind us. I have to be honest, I don’t think Captain Clarke has grasped the concept at all. I turned around to find him trying to take a selfie in the photo on the left. The only problem was that in his hand is not a smartphone with a camera, but a Nokia 115 that doesn’t have a camera. I think someone needs to explain to him that to take a selfie you need a camera on your phone! We did get some nice shots of the boats, the Gateway to India and also of the Taj Mahal Palace and I have put these in a gallery below. Having spent a lovely hour there though, it was time to leave. We returned once more to the Taj and to our room, collected up the last of our belongings and left the room (leaving our cases to be brought down by the bellboy of course). We checked out of the hotel and were met by the chap who had originally met us at the airport. He accompanied us to the airport and, on the way, explained that he was the only person working for W&O today because he is the only christian in the office and the rest are hindu and today is a hindu festival. His day had started at 06:00 and he wouldn’t finish until about 02:00 tomorrow morning! 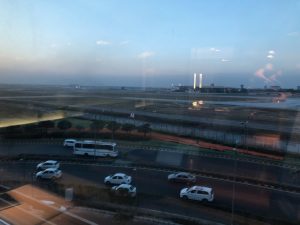 Our room directly overlooks the runway but with sound proofed windows you can’t hear a thing.

The drive to the airport was uneventful, if not the usual chaos of driving anywhere in India. We made it in record time (just about 45 minutes) which was handy because we arrived 15 minutes before we were due at the gate! We had thought that our pickup time of 13:00 for a 15:00 flight with a one hour drive to the airport was cutting things a bit tight – we still think it was! By the time we had got through security, we had just 4 minutes to get to the gate! As it was, we got to the gate and had to wait a good 20 minutes before we boarded, but had the flight left on time we would have been very tight indeed. The flight itself was fine – row 38, which those who have read earlier blogs will know I am not keen on – but it was OK. The pilot seemed to make a bit of a meal of things coming into Delhi but we eventually hit tarmac and managed to get three lots of wheels on the ground before the end of the runway, so all was OK. We are now in a Hyatt at the airport overnight before returning home tomorrow. The view from our room is directly of the runway but you can’t hear a thing because of the sound proofed glass. Plane spotters would love it! 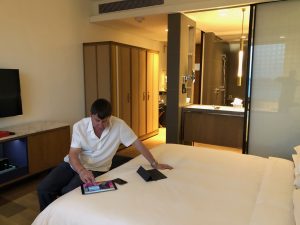 Captain Clarke relaxing in our room at the Hyatt Andaz at Delhi Airport.

Tomorrow we will be returning home. We are already checked in for our flight. We are being picked up at 08:45 in the morning which is quite early for our flight departing at 11:05 as we are literally 5 minutes from the terminal building but we have checked out the lounges at the airport and discovered that the Plaza Premium Lounge is reserved for First Class and Executive Gold Card holders, so I suppose we’ll be able to put up with that! We will be sad to be leaving India. We have had the most wonderful time! OK, we have spent a fair amount of it on the ‘India Weight Loss Programme’ but it hasn’t spoiled our holiday in any way shape or form. We have enjoyed the luxury, we have enjoyed being a little bit pampered, but we don’t do this kind of holiday often. In fact, we have never done it in quite this style before. This was a celebration of 30 years of companionship and quite a few ups and downs over that time. Will we come back to India? Definitely!!! And we won’t be waiting 30 years to do that! It really has been the most incredible trip and, as always, it is sad that it has to end. That said, we have wonderful friends at home and a great big hairy thing that we can’t wait to see! There will, as always, be one final missive tomorrow, just to catch any last adventures on our way home. Tuesday is very much back to work with a full on week ahead! Oh well, it can’t last forever, it is, after all, RudyMenTerry!