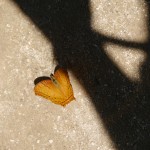 At the Butterfly Park

So, having been rather lax about giving my brief report yesterday, I posted it earlier today. So now for today’s report, (which is, of course, about yesterday … confused, you will be!). Now, I’m not one to complain but … these excursions will be the death of me! I mean, we’re on holiday and I’m knackered! What is going on? So today we asked our guide if we could keep the excursion to a minimum. After some discussion, (and negotiation), we decided on a single visit to the Kuang Si Falls. On the way out of the hotel we bumped into the hotel manager who suggested that, if we were going to the falls, we should visit the newly opened Butterfly Park too. So, our single destination visit turned into two! Now, I should say at this point, I was totally in favour of the addition of the Butterfly Park and so we decided to add it to our itinerary. Our guide wasn’t quite so keen, but, (whether true or not), we were told subsequently that it doesn’t appear on the guides’ official tour destinations because there is no money in it for them. 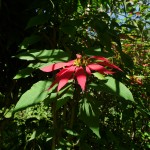 We drove out from Luang Prabang for about 45 minutes until we reached the Kuang Si Butterfly Park which is actually almost at the parking area for the Kuang Si Falls. It is truly beautiful! A young dutch couple, Olaf and his wife Eneke had spent a year travelling before finding themselves in Laos and spending some time with a family in this relatively remote location. It transpired that their neighbour had a plot of land that was available and, after some deliberation, they decided that they wanted to lease it and to build a Butterfly Park on the land. Three years in the making, the park opened earlier this year. It has beautiful gardens that have been created to provide the right habitat for the native butterflies and has meandering ponds and water running through it. 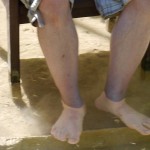 The ponds have guppies in them which naturally like to eat dead skin on feet etc., (a little like the fish spas you see in England but without the risk of infection because these are in constantly running water), so Captain Clarke felt it only right that he should give it a go. His fee were duly submersed in the water and the fish came along for a feast. Apparently it wasn’t that effective as he had a pedicure whilst we were in Bangkok! The park boasts around 40 species of butterfly, all native to Lao and the collection is growing all the time. 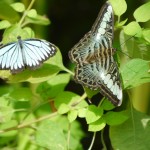 We were made very welcome by both Eneke, (who showed us around), and Olaf who does a lot of the work and spent about an hour and a half with them. We genuinely do hope that the park works out to be a success for them because they have put so much effort into building a beautiful environment! Interestingly, one of the biggest predators to the butterflies, other than the ants that eat their eggs, are spiders. Apparently, on the evening before we visited Eneke and Olaf had gone out in the dark to check the enclosure and discovered spiders as bit as your fist that were building webs to catch the butterflies. Yuk! I shan’t be rushing to meet them at night! 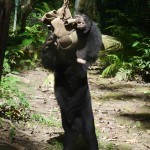 Having enjoyed time at the Kuang Si Butterfly Park it was onto the Kuang Si Falls. We were dropped at the entrance where the car took the road to where we would ultimately finish and we took a pathway that took us toward the falls. The path passes a wonderful bear sanctuary that was setup by an Australian, Mary Hutton, to give sanctuary to bears that have either been kept in captivity for a variety of reasons, but usually in ridiculously small cages, or have been captured for body parts to be used, (particularly in Chinese medicine). 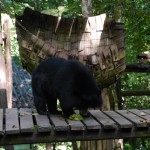 There are currently 24 bears in the rescue centre

I certainly won’t go into details here, dear reader, but suffice to say it is cruel, places the bears in great pain and is totally unnecessary. Bears that are at the sanctuary will never be returned to the wild unfortunately, simply because it was humans that treated them so badly, but it is now humans that have rescued them and feed them – they trust humans. If they were to return to the wild and a human approached to re-capture them or to treat them cruelly, they would trust them and would become victim once again, (probably for the last time). It is a truly sad state of affairs that these beautiful creatures should be so vulnerable because of actions that we humans have taken against them! Thank goodness for people like Mary Hutton and the Free Bears Fund! 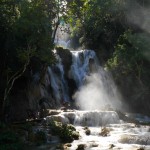 And so, finally, onto the falls themselves. I am still struggling with the concept of photo galleries, so bare with me. I am working on a solution, but the WiFi is often very slow and uploading photos can take several hours! For that reason I will only post a couple of photos here, but trust me, there are many. The main fall is a 60 metre waterfall, although there are plenty more along the way. We were told that the actual falls are 29km long, although we only walked about 2km along the path. There are lots and lots of pools that are filled with clear blue water, many of which you can swim in. 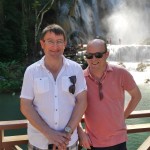 Captain Clarke and myself at the Kuang Si Falls!

A couple of the pools are sacred and swimming is banned, but in general as you climb towards the main fall, you find pools along the way and, inevitably, in most, people swimming. The falls are, without doubt, spectacular and I am exceedingly glad that we visited them although, that said, by the time we got to the end and were re-united with our driver and lunch, I was truly exhausted and only really wanted to get back to the hotel and sleep! 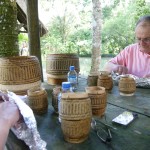 Valiant efforts were made to eat the lunch!

Lunch was served, although to be honest, I wasn’t hungry. I believe that the chicken in stagnant river water yesterday had rather put me off! I am pleased to report that Captain Clarke made a significant dent in the lunch however, although Great Uncle Bulgaria and Madame Cholet were not terribly impressed and, despite valiant efforts, left the majority of the food too. I had made the rather fortunate choice to decline the lunch, in any event, and had donated it to our driver should he be interested in it. He wolfed it down, so it can’t be anything wrong with the food itself, more just the fact that this food is really not to our western taste!

And so, we returned to our hotel. We walked into the hotel and I had every intention of taking some to read a rather good book that I have been reading, (Prisoner of Birth – rather good!), but alas, my tiredness overtook me and I fell asleep for the next two hours! By which time I was due to be getting ready for an evening sortie to find a restaurant. My rather unaccounted for slumber resulted in me having insufficient time to write a brief report and, as a consequence, I did not complete it until this morning! (I shall be having words with myself to ensure this doesn’t happen again!)

We left the hotel having decided to dine at a restaurant recommended by some other guests that we had met. They were English, although they lived in Australia. Upon questioning from where they came in the UK, I was somewhat taken aback to learn that they came from Tunbridge Wells! (A place very well known to me!) However, they had visited the ‘Blue Lagoon’ on the previous evening and recommended both the food and the wine. We took their recommendation and booked a table at the restaurant shortly before we left the hotel. Upon arrival it was quite obvious that this was a restaurant of some quality. It transpired that the Chef, (who kindly came and spoke with us towards the end of the evening), had previously spent some years working in Switzerland. He was originally from Lao, but spoke excellent English, German and French. The menu reflected his Swiss influence and boasted both Swiss dishes as well as traditional Lao and Thai food. Ultimately, despite studying the menu for some considerable time, we all decided on a cheese fondue and it was excellent! We can therefore now formally declare that the fondue season is open! It’s RudyMenTerry!