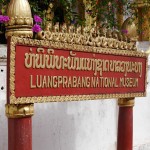 No blog yesterday. It has to be said, that we are a little travel weary at the moment. Having been out on the daily excursions, we got back to our hotel and I fell asleep. Madame Cholet, Great Uncle Bulgaria and I are, frankly, knackered! We asked Lao, our guide, if we could cut our excursions down on Sunday to a half day rather than a full day. I think something was lost in translation – half a day turned out to be from 08:00 to 15:30 which I would call a pretty full day! Anyway, on with the brief report. Our first stop on Sunday was the Royal Palace. 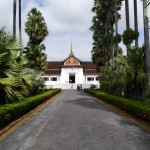 This is a beautiful building that was constructed at the turn of the last century and was the residence of the King and Queen of Lao. Now, there is some confusion over the monarchy in Lao. Our guide says, and indeed we have read elsewhere, that the last King of Lao died in 1959. There was a King though who reigned until 1975, but we are told he was an unofficial King as he was never crowned. The confusion comes, though, if you visit the Royal Palace, (which is now known as the National Museum of Luang Prabang!), where there are lots of artefacts and gifts that were presented to the ‘King’ in the 1960’s and even 1970’s. 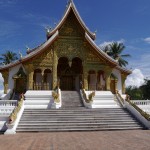 The house of Prabang

The Royal Palace is generally a bit of a confusing place. There is also a building there which houses a small Buddha, (made of 90% gold and called a ‘Prabang’), which looks like a temple but isn’t one. Apparently this is called the ‘House of Prabang’ and cannot meet the conditions to be a temple because it only meets one of the five criteria. Apparently, in order to be a temple, there must be a building, (such as this), but then there must also be monks living at the temple, (not here), there must be accommodation for the monks, (not here), there must be somewhere for the monks to eat, (not here), and a ‘Stupa’, (not here). All very confusing! Now, you may be wondering, dear reader, about the word ‘Prabang’ and the name of the city of ‘Luang Prabang’, and yes, of course you have now surmised correctly, ‘Luang Prabang’ means the city of the Prabang! Actually, in our ongoing quest to crack the languages, here are two more very important ones for you. To greet someone in Lao, you say ‘Sabaidee’, (pronounced Sab-aye-dee), and to say thank you it is Kopchi, (pronounced Cop-Chy) – if you want to say thank you very much, Kopchi Li Li, (Cop-Chy Lye Lye). All terribly interesting! 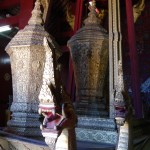 Our visit to the Royal Palace was scheduled to be approximately an hour to an hour and a half maximum. We eventually left after two and a half hours. We had been overtaken on our tour by numerous groups! This was largely due to two factors. The first is that if you ask our guide a question, it usually takes him about 5 minutes to answer with more detail than even the best of people need or can take in. The second was summed up by Great Uncle Bulgaria who, at one point, turned around to me and said, “With all these people overtaking us we must be either very interested or f***ing slow!”. I pointed out that I believed it to be a combination of both! We visited the Royal transport housed at the museum but photographs were forbidden and then we visited the House of Prabang. This was a bit of a let down if I am honest. We climbed up all the steps to the top and then discovered that you can’t go inside! I managed to get a sort of photograph, but was definitely a bit disappointed that we couldn’t get closer. 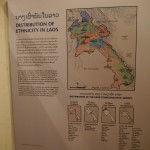 The tribal makeup of Lao

From the Royal Palace we moved onto the Museum of Arts and Technology. This was a place dedicated to the various tribes and sub-tribes that make up the Lao population. Our guide, for example, is from the Mong tribe. He is a ‘White Mong’. There are also ‘Black Mong’, ‘Mien Yao’, ‘Mun Yao’ and a whole bunch of other tribes that make up the ‘Mong’ people. In Lao there are four primary groups of Tribes with many sub-tribes, the four groups are; ‘Tai-Kadai’, ‘Hmong-Yao’, ‘Sino-Tibetan’ and ‘Austroasiatic’. From these there are something like 114 sub-tribes that may speak variations of the language. Enough of this, this is ‘Captain’s Log’ stuff! Anyway, the visit to the museum was interesting and contained exhibits of various crafts that are associated with the tribes. By this time, however, we were getting tired and we still had lunch and a visit to another temple to do before the day was over. 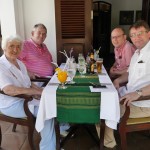 Lunch on the bank of the Mekong

Lunch was in a beautiful setting and a very nicely decorated restaurant on the banks of the Mekong river. I’m afraid that’s the good part over with! It was a set menu of typical ‘Lao’ dishes. Oh dear! It wasn’t to my taste, or largely to anyone else’s in the party! The first course was a local sausage served with a chilli paste and ‘river weed’. (River weed is what it says, it is weed taken from the Mekong, flattened out, sun dried and then sprinkled with garlic, tomato and sesame seeds. It really isn’t that bad and was probably a highlight of this meal!) The sausage was ‘different’ but not that bad and the chilli paste certainly had some fire to it! The second course was fish cooked in a banana leaf. This didn’t sound too bad and Captain Clarke actually liked it! The fish, (tilapia), is cooked with a multitude of herbs in the banana leaf. Actually, if the herbs hadn’t been added, (particularly the one that tasted like industrial cleaner), it wouldn’t have been too bad! As it was, it was not good. The third course was the piece de resistance! This was called ‘Spicy chicken stew with sticky rice’. Now, it is a known fact that I am quite partial to a piece of chicken for lunch, but this really was unbelievable. The chicken was served with sticky rice that you could, frankly, build houses with and it would be safer than bricks, but what really made this dish was the liquid in which the chicken was served. This was a gloopy liquid, again fully of unmentionable herbs, that tasted somewhere between stagnant river water and wallpaper paste. I did my best, but I’m afraid, in then end, I had to succumb and lie and tell them I was full. It was truly disgusting! I declined the desert which was dragon fruit filled with tapioca and, my goodness, I am glad I did! Memorable for all the wrong reasons! 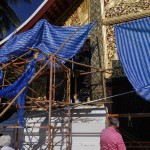 After lunch it was on to another temple. This time it was apparently the only temple not to be attacked when the communists were trying to take over. Apparently, this was largely due to the fact that one of the communist leaders had once been a novice monk here. It is a beautiful temple and is undergoing a significant amount of restoration at the moment. As with all of the temples we have seen, it is beautiful and impeccably kept. However, at this point in the day we were all very tired and had, frankly, had enough. Great Uncle Bulgaria said to me, “For goodness sake, don’t ask any more questions!”, and promptly asked another question for which, I could happily at that moment, swung for him! We did eventually leave the temple and return to our hotel, where we all went to our respective rooms to rest for a while. So tired were we, that we didn’t leave the hotel in the evening and simply had a bar snack and a small drink, (Captain Clarke stayed on for a bit more of a drink), before retiring for the night. These excursions are exhausting!!! It’s RudyMenTerry!