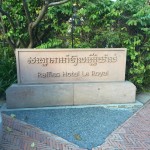 Before I start, dear reader, I can now tell you that there is a photo gallery attached to this and every other post. You will see the link at the bottom of this page, but you can also select Photo Galleries from the left sidebar at any time. Sunday, dear reader, is another day of travel. Travel days are always difficult to document because they pretty much follow the same routine; get up, have breakfast, travel to an airport, hang around for a flight, get on a plane, travel somewhere else, get off, wait for luggage, pickup luggage, meet guide, transfer to hotel, unpack go for drink, have meal, go to bed! Today was really not much of an exception. We got up and had breakfast, (a light breakfast for myself, I am feeling a little delicate – must have been the ice!), packed and checked out of the wonderful Raffles Hotel. We were met by our guide, Korona, (who had taken use to the Killing Fields on Friday), and our driver and left for the airport. The drive usually takes around 45 minutes but, because this was a Sunday, there was very little traffic. We actually did the journey in just less than 30 minutes which meant that we were at the airport too early and the check-in wasn’t open. Great Uncle Bulgaria did his best not to be grumpy, although one could detect a lot of huffing and puffing! 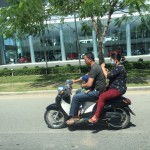 Our journey to the airport was not unusual, but it did allow me to take a photograph of something truly incredible. The law in Cambodia is that the rider of a motorbike must wear a helmet and that each motorbike can carry one passenger. This is routinely ignored and the police appear to take no notice. We have seen motorbikes carrying up to four people, we have seen motorbikes carrying everything from worship statues to reinforced steel to artwork but if you look carefully at the photograph on the right, dear reader, you will see that not only does nobody on this motorbike have a helmet on, but there are three people on the vehicle. The driver, a female, (presumably his partner), and, since he is driving with one hand only, the driver has a small child in his left arm riding in front of him! Apparently road death is now the single biggest killer in Cambodia with up to 6 people killed a day. Really?! One can’t imagine how that is happening!!!  I think it is time that they tightened the laws on motorbike use!

And so, at the latest airport, we stood around waiting for the check-in desk to open. Once the check-in had opened we were able to check-in our suitcases making life much more comfortable. We took the elevators to the departure lounge and, having passed through the security checks, we made our way to the lounge. On arrival in the lounge two things became apparent; 1 it is not very big and there weren’t enough seats for everyone to sit down, 2 the plane before ours that was flying to Siem Reap was delayed and had not yet departed. This second piece of news was not good. This was the 12:40 flight to Siem Reap. Ours was scheduled to be the 14:05. Flight time is scheduled to be 45 minutes and it took the mind of a mathematician to work out that, fortunately, this couldn’t be our plane as there wasn’t sufficient time for it to fly there, unload, re-load and fly back if it ran to schedule. This put some minds at rest because others in the party were concerned we may be about to experience our first significant delay! 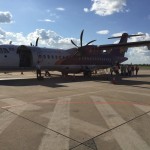 I don’t wish to sound negative, dear reader, but there is one aircraft that I cannot stand. After my many years of travelling and flying at least 2 or 3 times a day, I came to hate one particular aircraft – the ATR72. I hate this plane for a number of reasons; firstly, the damned thing has a habit of falling out of the sky if it’s turboprop engines get a bit cold, secondly, it is a turboprop which means it is incredibly noisy, thirdly, it gets chucked about in the sky like a cork in the English Channel and, finally, they are all older than me! It was inevitable, therefore, that at some point on this journey we would encounter one. Today was that day! In all fairness, the flight wasn’t too bad and, being only 45 minutes, it wasn’t long enough for it to be too bad, but I would still assert that this is a truly dreadful plane that should have been taken out of service before I was in short trousers!

And so, we arrived in Siem Reap. Siem Reap International Airport has just the one luggage belt, as seems to be the situation in almost every airport outside of Bangkok, (I wonder how many luggage belts Norwich International Airport has?), and just to add to the fun, the belt wasn’t working. Each case was manually passed through the hatch by one person, taken by another and then placed on the belt which didn’t move. It was a little chaotic but, in all fairness, Great Uncle Bulgaria didn’t let on that he was grumpy although a lot of huffing and puffing could be heard from his direction! Our guide was on hand to meet us and we were duly transferred to our hotel, the Shinta Mani in Siem Reap. The hotel is very new and, whilst not Raffles, is comfortable and offers two bars and a restaurant with rather unique ‘swings’ as tables outside, (I shall try and get a photograph before leaving). We enjoyed some cocktails during ‘happy hour’ this evening and took dinner in the restaurant, (inside … getting Madame Cholet and Great Uncle Bulgaria onto those swings would be one thing, getting them off after dinner and a few electric soups would be quite another!). Tomorrow is the full day visit to Angkor Wat. It should be a good day, although it will involve a lot of walking and the temperature here in Siem Reap is expected to be around 33 degrees celsius. We must take plenty of water. It’s RudyMenTerry!