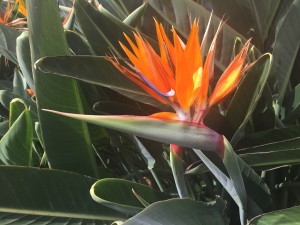 A Strelitzia flower in the hotel garden

On the second full day of our holiday we took a leisurely breakfast after rising again after 9am! One of the many delights at breakfast is the daily news sheet you are offered. This is available in English, Spanish, French, German and probably other languages too. I have taken to reading it in Spanish as it a) is more entertaining and b) tends to have news relative to Spain and the Canaries whereas the English version has news relative to England. It is only an A4 sheet and doesn’t take long to read. On the rear of the news is a page dedicated to news about the hotel for that particular day – recommended dishes of the day in any of the 5 restaurants, activities that are available, etc. Being listed as one of the ‘Leading Hotels of the World’ means that the hotel has to attain and maintain certain standards. One of these is known as ‘animación’. ‘Animación’ is not, as one might assume, ‘animation’, (which the bloody autocorrect on here keeps trying to make me type!), but actually means entertainment in this context.

One of the ‘animación’ activities on offer was a demonstration of how ‘Papas con Mojo Picon’ are prepared. Now, don’t get this wrong, I am quite sure that there is an art to boiling a potato, however I wasn’t over enthralled by the prospect of watching a potato boil, but Captain Clarke thought we should go along. At the appointed time, (12:30), we toddled off to the restaurant Palmera Real to watch the demonstration. Unfortunately, when we got there, it wasn’t apparent where the demonstration was to take place. It was also not apparent that there were any other guests eagerly awaiting this demonstration! Not to be put off, Captain Clarke asked one of the waiters in his best Spanish where in the restaurant the demonstration was to take place. The waiter responded, ‘Yes, the restaurant is open and of course we serve Papas con Mojo Picon’ – something appeared slightly lost in translation here! 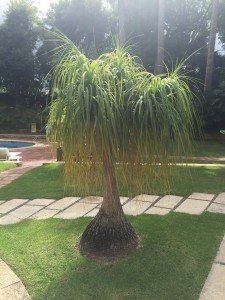 Now that is what you call a Beaucarnea!!

Stepping in to assist, I explained to the gentleman that there was supposed to be a demonstration of how to boil a potato or something and asked again where it would take place. He relayed this question to a colleague who seemed much more on the ball. ‘Ah’, he replied, ‘that doesn’t take place until 12:30’. I didn’t respond – I simply raised my wrist and looked at my watch, (which now read 12:32). The waiter looked at his own watch, realised the error of his ways and scuttled off in a panic. Some minutes later a manager appeared and apologised profusely that the hotel was very busy today and that the demonstration would take place in 5 minutes. 25 minutes later, we were still standing around waiting – although there had been a flurry of activity with tables being moved, loud clanging and general mayhem inside the restaurant. The manager re-appeared rather red faced and said it would be another 3 minutes. 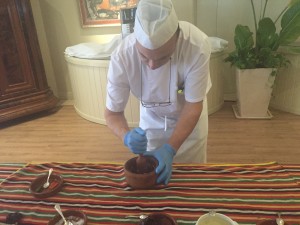 After a further 10 minutes or so, the manager appeared once again and offered us both a glass of champagne or some wine. We opted for the white wine … after all, Captain Clarke had already had Cava for breakfast! The wine arrived, (very good too), and we went inside the restaurant where a chef was frantically pounding garlic in a pestle and mortar. As we were the only guests there to watch the demonstration, it seemed only right that we should try and engage the chef in some form of conversation, (or explanation of what he was doing). We got chatting to him and he explained how the ‘Mojo Picon’ is made, (pounding garlic, chilli, pepper unique to the Canary islands, salt, paprika, parsley, white wine and oil into a paste), and how every person has their own slight variation on it, but that there are two basic sauces – a red one, (which he was making), and a green one, (which simply uses green pepper and chilli instead of red pepper and chilli and has a lot more parsley in it). The whole demonstration lasted about 5 minutes! We tasted the sauce with some local potatoes which we asked him how were cooked. He explained that they are placed in a pan with very little water and about two teaspoons of sea salt and then cooked over a very low heat for about 35 minutes until they are ready. Now I understand why it took 35 minutes or them to get ready for the demonstration!!! Clearly this is not one of the most popular activities in the hotel and they weren’t expecting anyone to turn up!

Now being experts in the art of preparing ‘Canarian Potatoes’, we decided that, since the sky was very overcast, it would be an ideal opportunity to drive to Santa Cruz and visit ‘El Corte Inglés’. We hopped into our car and drove off in the general direction of Santa Cruz. As we drove up the mountain, (you basically drive over the mountain whichever direction you want to travel), we realised that the rain that had been threatening had arrived. It rained all the way to Santa Cruz, (where it was beautifully sunny when we got there), and all the way back. Having concluded some retail therapy in El Corte Inglés, (I bought some more shorts and then bought Captain Clarke some more shorts – he seems to be doing remarkably well out of my short shortcomings!), we returned to Puerto de la Cruz where Captain Clarke took to his bed – clearly worn out by the day’s activities! 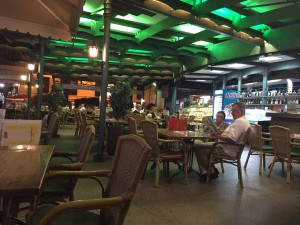 The bar in the middle of Plaza del Charco

I sat on our balcony and watched as the rain came down quite heavily, but it only lasted an hour or so. For our evening meal we decided to go down into the main town of Puerto de la Cruz and find a restaurant there. We procured a taxi directly outside of the hotel and took our ride to the Plaza del Charco in the town, (€3.45). Once there we had a wander around the town, soaking up the atmosphere, and took in the sights. Despite being Saturday evening it wasn’t too busy and we had a good walk around. Eventually we decided to sit in a bar, have a small libation, and contemplate where to go for dinner. One thing I am not so keen on in the main town is the number of restaurants that have staff outside trying to entice you in to eat. Having said that, I am very good at saying ‘no thank you’ in any number of languages! 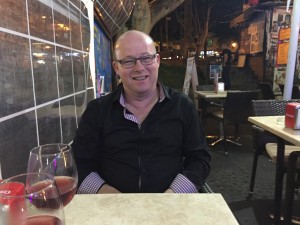 I am actually here!

We decided to consult Trip Advisor to see if there were any good restaurants nearby. There were quite a few. I eventually happened upon a review of a bar/restaurant that had excellent reviews that were all Spanish. Having read a few I suggested that we should go to this particular restaurant and give it a try. Captain Clarke, still clearly suffering with fatigue, asked how far away it was. I consulted Trip Advisor – 20 metres! We could just about make it that far! 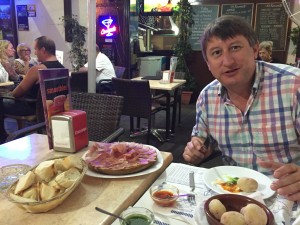 The restaurant, (actually more of a bar than a restaurant), called ‘Tasca Bodega El Rinconcito’ is in the Plaza del Charco, (for those who visit Puerto de la Cruz, it is on the right of the square if you have your back to the harbour), is small, has no-one outside trying to entice you in, and definitely basic in look and feel. (Plastic tables, paper napkins, etc., etc.) The food, however, is stunning! They really only do tapas, although every plate is almost a meal in itself, the portions are so large! But the food was superb! The staff were very friendly and very helpful – they don’t appear to speak English, but don’t let that put you off. We had Papas con Mojo Picon, (obviously!), jamon serrano, albondigas, (meatballs), acietunas, (olives), cerdo asado, (roast pork), and ensaladilla, (an allegedly ‘small’ salad!), all washed down with a rather dubious, but perfectly drinkable, rosé wine! 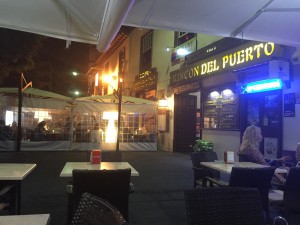 We finished the meal off with a cortado each, (small coffee), and, of course, a glass of ‘Soberano’, (Spanish brandy). Having read the reviews on Trip Advisor I could well understand why the Spanish liked it so much. All of the other people in the bar were Spanish and it was quite clear that some of them were regulars. I don’t think that the fact that all the reviews on Trip Advisor are in Spanish is doing them any favours – people may well miss out on this wonderful place. There should be an English review – there is now!

Returning to the hotel we popped into the bar for a nightcap where guests were being entertained by the ‘Mencey Band’. Hmm, Saturday night entertainment wasn’t, if I am to be totally honest, at its best! Today being Sunday will be a more leisurely day. The sun is out, (although the forecast is for rain), so we may go and visit the Botanical Gardens. Only time will tell!