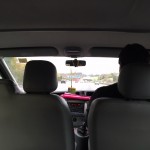 So, here we are – on our way to Bangkok. The taxi to Heathrow was expertly booked by myself, of course, and turned up on time. It did turn out to be rather more like a van than a car, but for the purposes of getting the four of us and our luggage to the airport, it was just fine. Interesting that others had been rather disdainful of the amount of luggage carried by myself and my fine companion Captain Clarke, but when the luggage was weighed at Heathrow, (how unsavoury – makes you feel like you’re being treated as cattle), it transpired that theirs was heavier than ours!

I did have to have a little chat with the very nice lady on the check-in. It became apparent that our luggage was destined directly for Bangkok whereas we, of course, would be stopping overnight in Doha. It transpired that the type of ticket we were travelling on meant that the luggage could not be taken off the aircraft in Doha. I explained, (nicely), that it was only because Qatar Airways had changed our flight times, otherwise we would have spent a day in Doha, so they had clearly also made a minor error in the ticketing. After a couple of telephone calls, the matter was sorted and bags were due to be available as required. Others remonstrated with me for being ‘too nice’, (not something that is often said about me!), but I pointed out that I prefer my food on the aircraft to be delivered directly from stove to seat and not via being wiped around the toilet seat, so I am always nice to check-in staff! I recommended that they read a wonderful book called ‘Air Babylon’, written by an ex-air stewardess who explains the niceties of flying!! Turned out they had already read it! 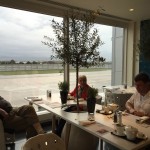 Now, I should point out at this juncture that the lounges are not what they used to be. Do you know, one lady in the lounge at Heathrow had to send her Eggs Royal, (that’s posh poached eggs served on a bagel with smoked salmon and topped with Hollandaise Sauce), back because the eggs were not soft enough … twice! What is the world coming to?! 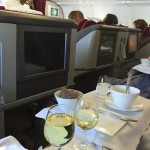 Flying this way is tough!

We got onto the aircraft and, much to some’s disdain, we turned right! It transpired that there were four rows of first class seats that had their own little cabin! Clearly people with more money than sense!! We settled down for our 7 hour flight down to Doha and enjoyed a light luncheon. I had the ‘Typical Arab Mezze’ consisting of Taboulet, Humous and Feta Salad served with Arab Bread – very nice! Others had food. I followed this with a Pesto Chicken served with green beans and asparagus, (the chicken was served in a kind of satay sauce and was good, if a little dry), others had food. This was followed with a selection of cheeses and coffee. I declined the dessert as I didn’t want to appear greedy! Others had food. Having surveyed the wine list, I decided that luncheon would be best accompanied by a rather interesting New Zealand Sauvignon Blanc. I have to say it was rather splendid! 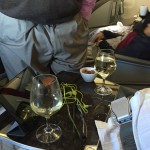 Without wishing to be one to cast aspersions, I do think that Captain Clarke took the word ‘complimentary’ rather too literally. It was when I noticed that the lovely lady serving luncheon was having to open a second bottle of wine, just for him that I began to wonder just how much he had imbibed. This was soon answered when I was informed that he had lost his iPad. It had slipped down in the seat somewhere and was nowhere to be seen. I had settled down to watch a rather good cinematic film, (Harry Potter and the Chamber of Secrets), when Captain Clarke announced his loss. Being ever patient and tolerant of all, I paused my entertainment and immediately took to the floor to search for the missing iPad. This seemed to cause great amusement for the adjacent passengers as I kept having to ask for the seat to be re-positioned so that I could look for the illusive device. As I asked for the seat to be placed in full flat bed mode, (it seemed to take an age for the bed to fully recline!), I spotted the missing device. It had indeed dropped down the side of the seat and had almost reached the mechanics of the seat. If the seat were to be fully erected, I feared the iPad would be crushed forever. The very helpful air hostess, (who had by this time come to observe the cause of the commotion), suggested that she would arrange for an engineer on arrival in Qatar, but this turned out to be unnecessary when Captain Clarke slipped his fingers deftly between the belt and the seat and pulled it out, (something I fear he had practiced before!). 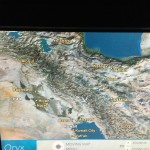 Flying over Iraq and Iran!

Finally we began to approach Qatar. I looked at the very helpful map on my personal screen and noticed that we appeared to be flying directly over the top of Iraq and Iran. Dear oh dear, these airline pilots must know what they are doing, I suppose. I did feel at one point though, that I might have to have a word with the Captain about comfortable driving as we bounced around in a little light turbulence – I’m sure he could have steered around it, but he was clearly unaware of the stature of the passengers he was carrying. It has been said more than once, that some of our party have a touch of royalty about them!! However, all was well and we descended gracefully into Doha.

Getting out of the aircraft I was reminded of days long now gone, (thank goodness), when I was engaged by that fine British company, (now Indian), called British Steel, (now Tata). I was visiting an interesting place in Port Talbot when, unexpected but during my visit, there was what is called a ‘Broadcast Storm’ on the network, (bare with me here, this is not a lesson in networking!). As I happened to be at the plant, (how fortunate they were), I was requested to take a look and to see if I could identify the cause. It transpired to be a printer in furness number five. Now, I think you see the relevance of this unfortunate digression – stepping off the airplane in Doha was a little like entering a furness! It was nine o’clock in the evening and 32 degrees celsius!  However, we collected our luggage, (which had, or course, been delivered to our destination), and made our way to our hotel via the cars that had been arranged and were waiting for us, (BMWs of course!). 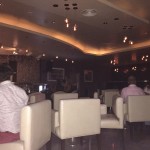 To round off the evening, we spend a very pleasant hour or so in the Rotana Jazz Club. I have to confess that the music was a little loud for my delicate and finely tuned ears. It was suggested that age had something to do with it, but I personally believe it is entirely due to the fact that I had them flushed last week, (something a man of my age and stature should do on a regular basis), and I can currently hear a pin drop at 300 paces! However, apart from the volume of the music, we had a thoroughly enjoyable time. I sample an excellent whisky that was produced by a fellow called Johnny Walker, (very odd spelling of Jonny, he must be foreign), and only paid £10 a shot for it – an absolute bargain! Fortunately, others drank only beer, (also £10 a glass), wine, (£15 a glass), and, believe it or not, Captain Clarke only had a tonic water. (Personally, I believe he had imbibed quite sufficient on the aircraft although would never be so indelicate as to suggest it! Mind you, the amount of empty bottles of Sauvignon Blanc that were being hauled off that aircraft in Doha … enough said!). We eventually retired at around 11:30 ready for our next flight which meant a very early rise the next morning.

It is, one has to say, unfortunate that during our brief stay in Doha, we could not find the time to meet up with our good friend The Doctor and his beautiful and long suffering wife. Alas, we arrived at our hotel at a little after 10pm and left again at 6.30am in order to get to the airport again for our flight down to Bangkok. Maybe next time. It would have been good! The problem, as is so often the case, is that we simply didn’t manage to get the time. Had our flights stayed as originally planned, we would have had the possibility to meet up, (although this may have proven impossible because of the good Doctor’s working situation), but with the flight brought forward to such an early hour it was, alas, not to be. It’s RudyMenTerry!

Leave a Reply to S of S&M Cancel reply